On 9 and 10 October, the MAMA team, including CEO Mark Fraser; General Manager Paul Singer; John Fraser and Phil Singer, undertook a visit to the remote village of Soibada in Timor Leste to scope the possibility of building a MAMA Pre-School.

Soibada is approximately 130 kilometres south-east of Dili at the geographic centre of Timor Leste. Located high in the mountain ranges, the village is only accessible by a gruelling 5 hour drive from Dili along a road that is best described as a ‘series of interconnecting potholes’. With no bridge access across the river, the village is cut-off during the wet season.

The Portuguese first established a college in Soibada in 1898. Many of the buildings retain some of the beauty of their Portuguese heritage although the village has been deeply affected by periods of conflict.

Critical infrastructure, such as running water, is non-existent and most buildings are in desperate need of repair.

In Timor Leste, almost two thirds of the adult population are illiterate, 90% of educational infrastructure was destroyed during recent conflicts and only 1% of teachers have any formal training. In a country where 50% of the population are under the age of 15, these issues are often compounded in regional and remote areas.

Recognising the critical importance of early childhood learning, MAMA has been liaising with an Australian organisation, the ‘Pittwater Friends of Soibada’ to explore the possibility of building a pre-school in Soibada. In addition to providing early education, the pre-school would also offer access to health, nutrition, and parent support programs.

The pre-school would provide a positive and fun introduction to schooling for children aged 2-5 years in a safe and clean environment. This would not only benefit the young children of Soibada by providing a structured learning continuum, but it would also enable the older siblings to attend their own school classes instead of looking after their younger brothers and sisters.

During their visit to Soibada, the MAMA team met with government and religious leaders to discuss the benefits of the project and scope possible locations for the pre-school.

MAMA has invited the village leaders to develop a proposal that meets the community’s expectations for the pre-school and helps empower the young children of Soibada.

The sun rising over the distant hills as the MAMA team leave Dili for Soibada. 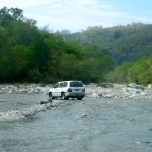 The river crossing on the way to Soibada.

Mark Fraser being welcomed to Soibada by Father Tiago.

John Fraser being welcomed to Soibada by Father Tiago.

Phil Singer being welcomed to Soibada by Father Tiago.

Mark Fraser handing over a selection of the art and craft supplies to Father Tiago donated by MAMA to the children of Soibada. 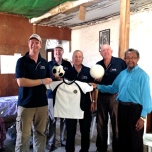 Paul Singer, Mark Fraser, Phil Singer and John Fraser handing over the sporting equipment to Father Tiago which was donated by the Gungahlin United Football Club.

Paul Singer with some boys in Soibada who had just been presented team shirts donated by the Gungahlin United Football Club in Canberra.

The competition was fierce and the skills were impressive. 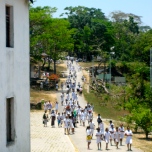 Children returning from classes in Soibada.

Mark Fraser and Paul Singer with Father Tiago exploring sites for a pre-school.

Paul Singer enjoying some time in the classroom with the children in Soibada.

John Fraser, Mark Fraser, Paul Singer and Phil Singer with the girls at the school in Salau, with their equipment donated by the National Convention Centre.