Recently, at the launch of Narelle Oliver’s latest book ‘Don’t let a Spoonbill in the Kitchen’, MAMA’s CEO Mark Fraser and General Manager Paul Singer were thrilled to provide Narelle with an update on MAMA’s latest projects. 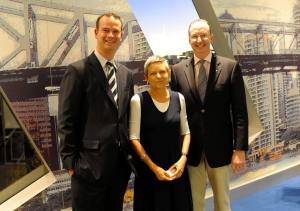 Narelle was interested to hear of MAMA’s new projects in Papua New Guinea and Kiribati. On hearing the updates, Narelle very generously offered to donate several volumes of her much loved books, which are respected as some of the great Australian children’s books.

MAMA greatly appreciates Narelle’s generosity and looks to presenting the books to the brand new MAMA Resource Centre in Kiribati during the opening ceremony next week.

Some of the books were presented last week by Mark and Paul, along with MAMA’s Patron, the Governor-General of Australia, Her Excellency Ms Quentin Bryce, during a visit to our most newest project partner, Buk bilong Pikinini in Port Moresby.

Mark Fraser, Paul Singer and the Governor-General present some of Narelle Oliver’s books to the Founder of Buk bilong Pikinini, Anne-Sophie Hermann.