In October 2016, some representatives from Make a Mark Australia travelled to Honiara in the Solomon Islands to visit Mercy School.

On arrival at the airport, we were enthusiastically welcomed by a group of the students – amazingly, some had never visited the airport despite only living several hundred metres away in the Burns Creek Settlement. It gave us an immediate appreciation that for many of the children, their lives were largely lived in the community immediately surrounding their home and school.

When we arrived at Mercy School, we were challenged by a group of students dressed as traditional warriors as part of a welcome ceremony. After accepting the MAMA group, the warriors led us through the school in front of the hundreds of students, teachers and community members. The energy, enthusiasm and warmth of the welcome reflected the magnitude of the school’s appreciation for MAMA’s contribution over a number of years.

MAMA first connected with the Mercy School in 2014. We funded the building of two new classrooms to accommodate a rapidly growing student population. Located in an underdeveloped settlement with limited access to basic services, the Mercy School provides free education to impoverished children. The school has one of the highest density and attendance rates of any school in the Solomon Islands, and the student population was rapidly exceeding the capacity of the school – with some classrooms accommodating over 100 children.

The MAMA classrooms were built by local builders using local supplies. They were completed in October 2014 and immediately put to good use as a focal point and activity hub for the Burns Creek community. The classrooms enhanced the ability of students to attend classes and engage meaningfully with their teachers, and provided a more positive and reliable environment for children to pursue their academic development.

From the seed of MAMA’s initial support, a new school campus has grown. One of the enduring legacies of MAMA’s contribution has been that it validated the existence of the school which has subsequently led to further support and government recognition (which had previously been lacking or non-existent). MAMA’s funding of the first two new classrooms led to:

Early success with the MAMA-funded project initiated a wave of confidence in the school’s ability to successfully manage funds and projects.

During a busy visit program, the MAMA team met with the Australian High Commissioner, His Excellency Andrew Byrne, and also visited the Australian funded Seif Ples Gender-based Violence Crisis and Referral Centre. There we heard about the various support programs and later donated a bunch of women’s personal items for use by the centre’s clients. 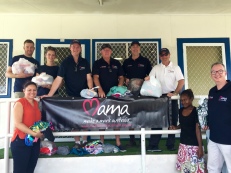 Back at Mercy School, the MAMA team was ready to role up the sleeves and help with some odd jobs. On a hot, humid day, the MAMA team painted three classrooms and were helped by the students with some of those harder to reach places. The children also helped paint the MAMA-funded playground, giving it a spruce-up after a year of heavy use and plenty of fun had by the kids. 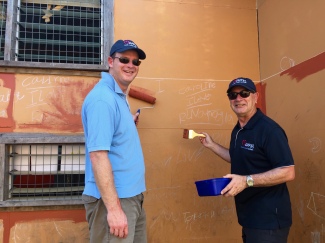 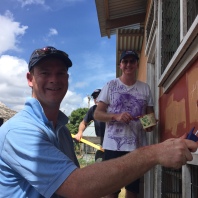 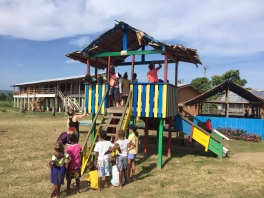 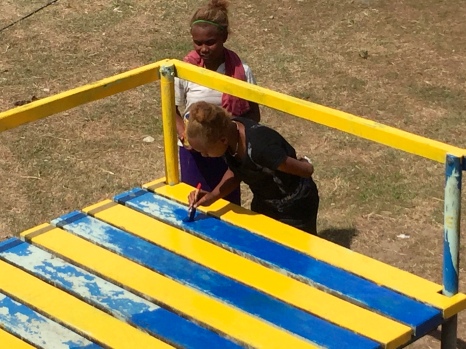 Throughout the day, we were able to genuinely connect with the children – some of them keen to help, others wondering what we might do next, and all of them proudly watching their school transform into a wonderful learning environment. We shared stories, learnt more about their culture, and listened to their hopes and aspirations for the future. 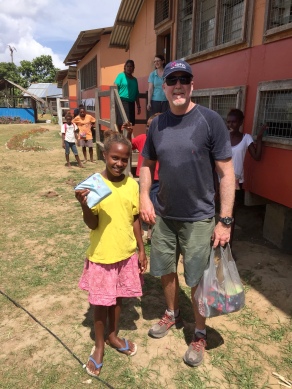 During a community event, we handed over bags of sporting equipment for the school (some donated by the Gungahlin United Football Club); educational resources, such as stationary, art and craft supplies, and student activity books; and hundreds of brand new satchels made available by the National Convention Centre in Canberra. The kids loved them! 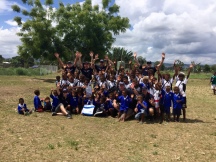 We were so touched and so moved by our connection with the students, and saw first-hand the impact of our involvement, that the MAMA Management Committee approved the funding of five brand new classrooms. The announcement, made by the CEO of MAMA, Mark Fraser, was received with great excitement and enthusiasm, and a sense of optimism for what lay ahead for the children of Burns Creek. 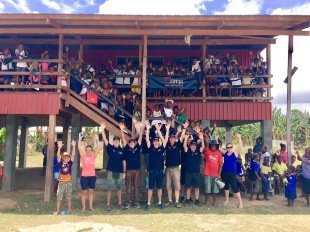 It was a fantastic visit, one which highlighted the importance and success of the relationship between Mercy School and MAMA in helping to empower these children to fulfil their dreams. 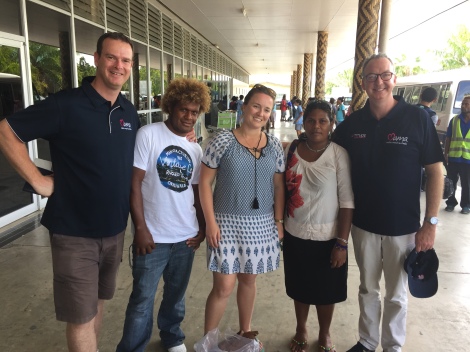